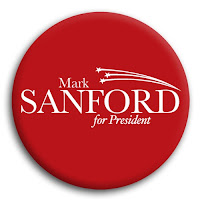 In an emotional press conference this afternoon, South Carolina Gov. Mark Sanford admitted that he had been cheating on his wife with a woman in Argentina, where he had been secretly vacationing the past six days. Sanford, who announced he was resigning his post as chairman of the Republican Governors Association, repeatedly apologized to his wife and kids and to his staff, whom he admitted misleading about his whereabouts. The governor’s aides told reporters yesterday that Sanford was hiking the Appalachian Trail, when in fact he was in Buenos Aires. “I’ve been unfaithful to my wife, and I developed a relationship with what started as a dear dear friend from Argentina,” Sanford said, tearfully.

Sanford insisted the affair began “innocently” with casual emails and phone calls—the woman had apparently sought Sanford’s advice on her own marital troubles. But their relationship developed into something more about a year ago, the governor said. He said he had seen the woman three times since then and that he had spent the last five days in Argentina “crying.” The governor told reporters that his wife and family had been aware of his affair for about five months and that he had spoken to his father-in-law about it before he left for Buenos Aires last week. Asked if he and his wife are separated, Sanford seemed to struggle for an answer. “I guess in the formal sense we’re not,” he finally said. Sanford, who had been repeatedly mentioned as a 2012 GOP presidential contender, was asked if he would resign from the governor’s office. He didn’t answer. “I’ve let down a lot of people,” he said. “And that’s the bottom line.”

What is it with politicians and cheating on their wives?
Maybe they should marry hotter women...